By admin on February 19, 2013 in Advanced Soaps, Cold Process Soaps 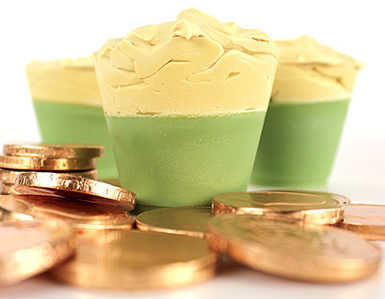 5.5 oz. Cocoa Butter
16.5 oz. Coconut Oil
11 oz. Olive Oil
16.5 oz. Palm Oil
1.6 oz. Shea Butter
3.8 oz. Shea Oil
1 tsp Vitamin E Oil (optional superfat)
7.7 oz. Sodium Hydroxide (Lye)
5 oz. Honey Ale Fragrance Oil
2 Cups of Light Beer (we used Coors Light)
14 small plastic cups (5 fl. oz. each)
Super Pearly White Mica
Titanium Dioxide
Diluted Green Apple LC
Plastic Cups (5 fl. oz.)
If you have never made cold process soap before, we strongly suggest getting a couple of  basic recipes under your belt before diving in…working with beer is an advanced technique. Check out Soap Queen TV on Cold Process if you want to get started with cold process. It’s a 4 part series that will take you through the basics. Also, be sure to review Working with Lye. Lye is serious business and you must, must, must understand the ramifications of working with it BEFORE starting this recipe.

PREP: The first step to a successful beer batch (in our opinion) is boiling flat beer. Let your beer sit open for 24 hours to get rid of the fizz, then boil it for about 5 minutes to cook out all of the alcohol. The beer really ‘poofs’ up during this boiling phase so don’t leave it unattended. Boil a little more than 2 cups of light beer just to be on the safe side (you’ll lose a little liquid when you cook the beer due to evaporation). Let the beer cool back down to room temperature before you get started. We used “light” beer for this project because dark beer discolors the soap brown.
ONE: Melt and measure the Coconut Oil, Olive Oil, Palm Oil, and Shea Oil. Then hand stir in your Cocoa Butter and Shea Butter until all of the oils are in liquid form.

TWO: SAFETY UP! Goggles on. Gloves on. Kids out of the way. No pets around. Safety, safety, safety first!
Then, measure out your lye (by weight) and beer (by volume) and slowly add the lye to the beer in 3 batches (pour a little lye and stir – repeat 2 more times). The reason we add the lye slowly is because it tends to roil and boil over if you add the lye to the beer too quickly (even if the beer is flat). Repeat until the lye is completely added and stir until the lye is dissolved. Let the lye mixture cool to about 130 degrees. 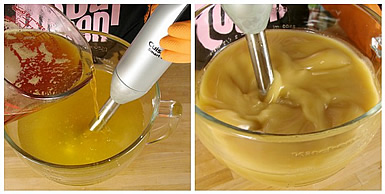 THREE: Slowly and carefully, add the lye mixture to the combined oils pouring down the side of the stick blender to avoid bubbles. Mix with your stick blender for about 30 seconds. 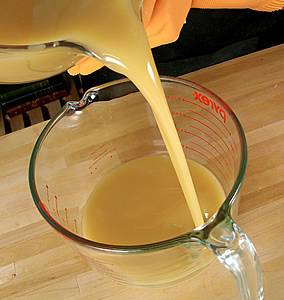 FOUR: Separate the batch in half. You can measure exactly or eyeball it like I did. Immediately get half of the batter into an electric mixer. Do not add fragrance to the electric mixer portion yet. While it’s mixing on medium, add 1 teaspoon of the Titanium Dioxide Slurry (see below for directions) and 6 ml of diluted Green Apple Labcolor. Keep the mixer on while while we work with the second half of the batter. 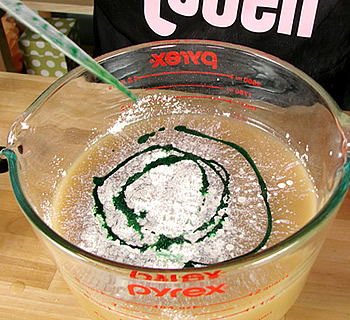 FIVE: To the other half of the batter, mix in ½ teaspoon of Super Pearly White Mica and 24 ml of Diluted Green Apple LabColor. Stick blend until you have a light beautiful green trace. Then add 3.5 ounces of Honey Ale Fragrance Oil and mix with your stick blender. 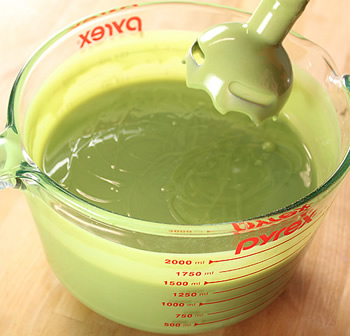 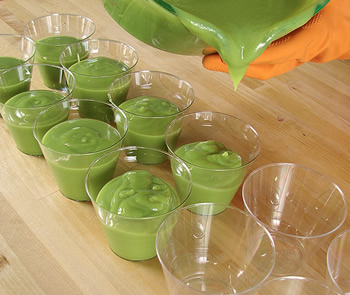 SIX: Fill up all 14 of your small plastic cups ¾ of the way up (leave room at the top for your “beer foam”). 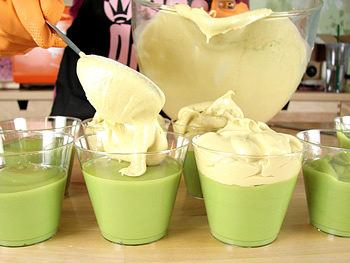 SEVEN: Time to check on the “foam”. It should be light and fluffy and slightly tinted green. Add 1.5 oz. of fragrance oil (we’re using less in this side because we want our foam to stay as light as possible). If the foam tamps down a bit, just speed up your mixer for a couple minutes and your foam should poof back up. Spoon the whipped soap on top of the green beer layer and smooth it with the back of your spoon.

EIGHT: Put the soaps into the fridge over night so they cool and discolor evenly (the Honey Ale discolors slightly, but it works perfectly for our green beer). Then release from the plastic cups and let cure for 4-6 weeks.
Oatmeal Facial Scrub and Mask
Waterlily Bath Fizzy