The following article was written by Stephanie Bruns (Konnor’s Mom) and is reprinted with her permission. You may contact Stephanie at sales@naturescauldron.com.

Read this slowly, read it well, and take every single word of it to heart.

Have you ever heard a splashing crash and knew instinctively what it was right away? Have you ever heard your 2 yr old son screeching at the top of his lungs for his mommy? Have you ever felt the helplessness of seeing your son cry bloody tears and see blood seeping from the corners of his mouth, meanwhile his skin is cherry red and you can feel the heat coming off of him…….

I *know* what it’s like to experience these things first hand, and I can honestly say that I sincerely hope with every fiber of my being that NONE of you *ever* have to experience what I went through last night. 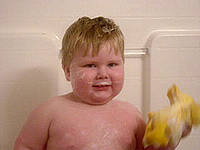 My son dumped more than 2/3 of a gallon of a 40% lye solution on his head. He was saturated from HEAD TO TOE.

You know, in almost 5 years of soaping, maybe even longer now, I’ve *never* had an accident. No, I didn’t get too cocky about my lye, what I got was relaxed, and very, very careless.

I had JUST set the pitcher (tightly sealed closed container of room temp lye solution) down on the counter. It was less than 2 minutes. I turned around to clear off the island in the kitchen, was in the middle of fixing supper you see……..then I was going to clear off the island because there was a lot of soap I was planning on making last night. So, why not set it here just for a minute so I can clear this out.

A minute is all it took.

The following series of events happened in less than 7 minutes.

He grabbed the pitcher, it was very heavy for his little 2 year old hands, so he dropped it…..on his head. Even though the container was sealed, the weight of the pitcher on impact caused the tightly sealed lid to pop off. Konnor immediately started screaming, I was there the instant it poured out all over his body. FROM HEAD TO TOE. I grabbed him right as he fell belly down in the puddle of caustic liquid. I’m sure we all know how SLICK and slippery lye solution is. I almost DROPPED him back into the liquid.

I *threw* him into the sink (about 4 feet away) starting running water on him immediately. Sprayer in one hand, phone in the other, screaming at 911. My son was screaming…..a sound I will never EVER forget. Eyes mommy eyes!!! His whole body was shaking in absolute anguish. Have you ever had lye solution splash up on you? Burns doesn’t it? It was on his WHOLE body. 911 was dispatched, Thorne was grabbing the vinegar, Kris was looking up the number for the Poison Control Center. I poured a whole gallon of vinegar over my sons head, kept on spraying his body with cool water. Called the poison control center to see if maybe there was something, *anything* else I could do to try to save my son. Ironically, they didn’t even MENTION the word VINEGAR. Irrigate irrigate irrigate. Yea yea………I got that covered.

His tears were blood tinged. He had blood dripping from his mouth. His skin was fire engine red.

What I saw then…. Right above his penis, about an inch or so, is a long BLACK and BROWN very DEEP BURN. Off to the left, where the tape from the diaper was, more deep burns. I was mortified, speechless, and sobbing uncontrollably. All I could do was hold my burning baby and rock and cry.

You have NO idea how helpless, how hopeless, and how low I felt at that moment. I’ve never felt so wretched in my life.

This WHOLE thing could have been prevented if I wouldn’t have put that container there. For only a minute you know. I was going to go back and pick it right back up after I wiped down the island. Really I was. Famous last words of a fool……..

We get to ER……..we had been in contact with them the whole way there so they were prepared and knew we were coming. They took Konnor in right away and we were stopped to answer questions. I walked into the exam room to see 8 people crowded around my screaming toddler.

The thoughts going through my mind……..he’s going to be blind. It’s all my fault. I was stupid and irresponsible. He’s going to be physically scarred and possibly disfigured. My beautiful precious perfect little boy just had his life ruined by his own MOTHER. He’ll never be able to see Sponge Bob again that he loves so much. He won’t be able to see his puppy or see the goofy faces his brother loves making at him. He’ll never ever see again. I did it, and it could have been prevented.

Those were my thoughts. I begged and pleaded with the doctors, with the gods, with all the powers that be to please save my child.

Ok. He’s NOT blind. He *can* see, but we’re very very concerned about the right eye where he got the most damage. He MAY have some vision loss, but until the cornea is completely healed over, we won’t know the complete extent of the damage. He’s on an eye ointment every 4 hours, and an eye drop (Mucomist) every *2* hours. And please remember this………the cornea does have a great capacity for healing, if it weren’t damaged by an alkaline solution.

Over all, all over his body, he has a fine rash. He has small blisters and excoriation in his armpits. His diaper area looks A LOT better today………..it’s not black anymore, but a beigey sort of color. They had to rough debrid his abdomen last night. He’ll likely have very minimal scarring there.

Plain and simple, I was stupid. I was very irresponsible. Only for a minute is TOO long to leave lye solution unattended, even though you’re less than 4 feet away from it and it’s in a sealed container.

I was repeatedly told by the ER staff, that if I wouldn’t have done what I did and acted as fast as I did, that he would have A LOT more damage done. That area in his diaper could have been his FACE. He COULD HAVE been blinded. The doctor thanked me for doing my research and he was honestly quite surprised that I could spit out the info from the MSDS and other sources so clearly.

I’m not looking for sympathy. What I want for YOU, is to EDUCATE yourself on all precautions where lye safety is concerned. And maybe more so, NEVER EVER leave your solution unattended for a MINUTE. Because that’s all it takes to ruin the life of a child.

The sounds my son made…….the pain he was in………his cries and screams will keep me awake for months. The thoughts of what I have done to my son, just knowing that I was that irresponsible with someone I love so much………the thoughts of what COULD have happened if I didn`t know what to do is what’s making me write this, BEGGING you to never EVER get lazy, or relaxed, or careless.

Learn more about Lye Safety in this video with Soap Queen, Anne-Marie Faiola: